The following are examples of animal abuse or neglect. Always contact the Animal Cruelty Task Force when in doubt to be safe.

WARNING: some of the following images are graphic and might disturb some viewers. Viewer discretion advised.

§ Animal hoarding arises when individuals house more animals than they can sufficiently care for. Animal hoarding is a complex matter that involves mental health, animal welfare, and public safety. Animal hoarding is defined by an individual’s inability to provide minimal nutrition, sanitation, shelter, and veterinary care standards. The lack of adequate care often results in animal starvation, illness, and death. In most cases, animal hoarders are in denial that they are hurting their pets they instead believe they are helping their animals. Possible indicators of animal hoarding may include the following: · They have several animals. · The pet owner’s home has deteriorated (i.e., dirty windows, broken furniture, holes in the wall and floor, extreme clutter). · There is a strong ammonia smell, and dried feces, urine, vomit, etc., cover the floors. · Animals appear to be emaciated, lethargic, and not well-socialized. · Fleas and vermin are present. If you believe someone you know is struggling with animal hoarding, pick up the phone and call the LCSO Animal Abuse Task Force at (239) 477-1622. A phone call may be the first step in getting the individual and the animals the help they require.

Food must be nutritionally sound to maintain animals’ health and adequate weight. –Food must be free from debris and bacteria/mold. –Ribs and hips may be visible in animals lacking sufficient nourishment.  –Water must be within reach of the animal in a clean vessel. –Water must be free from debris and algae. –Rain is not an acceptable form of water.

A shelter must be large enough for the animal to stand, turn around and lie down.  A shelter must have a roof, floor, four walls with a doorway, and protection from all-weather elements. Plastic barrels and crates covered in tarps, etc., are not acceptable.

Large-scale and unlicensed breeders are a concern, but we can crack down on cruelty in puppy mills and other substandard animal breeders with your assistance! The following are examples of Excessive Breeding/Overcrowding: –Female animals being bred numerous times per year –Little to no veterinary papers –Breeder won’t permit buyers to view the living conditions or animal’s parents –Selling animals before they’re weaned –Animals kept in undersized kennels, possibly without adequate shelter from the elements –Animals kept on wire-bottom cages with no solid surface available –Animals with wounds, missing or matted fur, excessively long toenails –Lack of sanitation – built-up feces under kennels or in the kennel area

The vicious blood “sport” of dogfighting is still thriving underground. The Humane Society of the U.S. estimates more than 40,000 people participate in organized dogfighting in the U.S., and hundreds of thousands more participate in impromptu street dogfighting. Possible indicators of dogfighting may include the following: –Dog poses scars on the face, front legs, hind ends, and thighs. Puncture wounds, swollen faces, and mangled ears are also telltale fighting signs. Contact the LCSO Animal Cruelty Task Force immediately if you see dogs with these characteristics. –A four-sided fight pit which may be constructed from chain-link fencing or makeshift materials, can be a few feet high and may be marked with blood from past fights. –Pit bulls on heavy chains, sometimes with padlocks. The dogs are often kept in sheds or otherwise confined in urban areas. –Multiple pit bulls appear abused, injured, unneutered, or unsocialized. Items and equipment used in dogfighting: –Breaking Stick is used to pry open a dog’s mouth to break up a fight. They are about a foot long, flat on one side, and often bloodstained. –The Jenny mill or cat mill is a harness with a spoke projecting from a rotating center shaft. Once the dog is harnessed, a small bait animal is tied to a spoke just ahead of the dog. This encourages prey drive and the physical conditioning of the dog. –Springpole is used to condition a dog for fighting by building up his neck and jaw muscles. The dog bites and holds onto the springpole, which is usually made from rawhide, knotted rope, tire, or other material suspended from a beam or sturdy tree branch. –Dogfighters use treadmills as conditioning tools, either homemade, like the slat mill, or electric. Look for a chain or harness used to tether a dog to the treadmill. –Medical supplies are often found in connection with illegal dogfighting operations. Some commonly used drugs include dexamethazone (steroid), amoxicillin and ampicillin (antibiotics), Canine Red Dog (iron supplement), and Winstrol-V (steroid). –Before a fight, handlers wash and examine their opponent’s dog under a referee’s supervision to remove any poisonous or caustic substances that might have been applied to the dog’s coat (a method of cheating); therefore, the presence of washtubs may be present 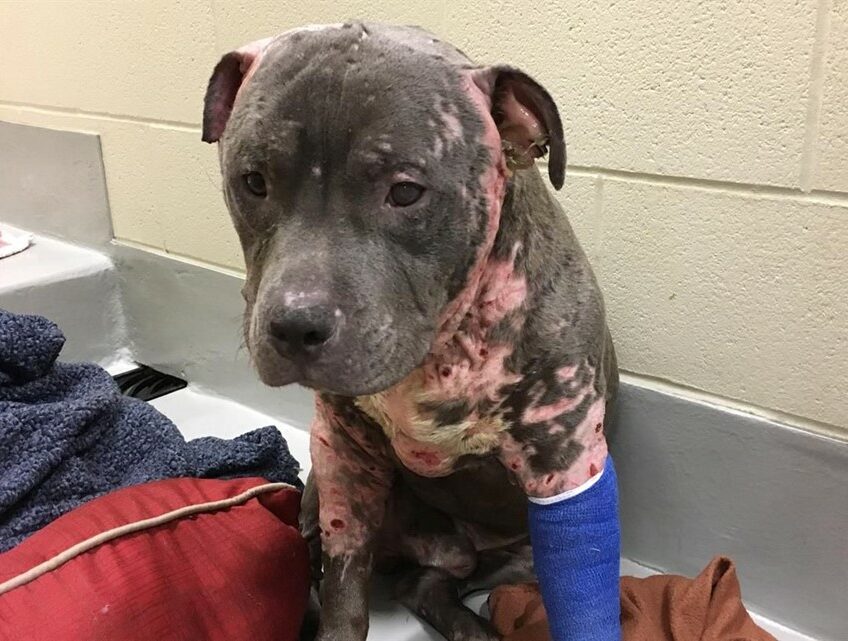